Cookies make it easier for us to provide you with our services. With the usage of our services you permit us to use cookies.
More information 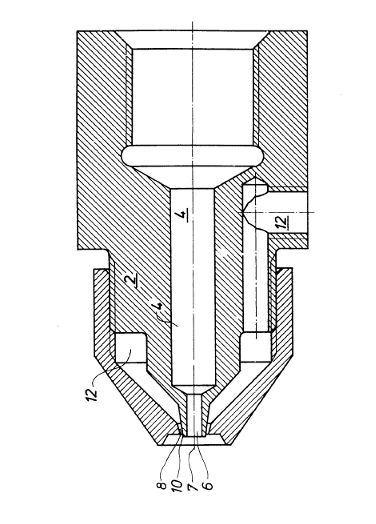 On 15 June 1979, a method and the nozzle of a device for applying an adhesive to a substrate were registered with the patent specification DE 2924174 C2.

The inventors Franz Hartmann, Alfred Böttcher and Carl Siegmann had discovered a novel method for processing hot melt adhesive. With this invention, the spray application found its way into industrial processing. Until this time, only the bead application was known. The patent claim describes the following advantages:

“(…)In particular, the advantages of the invention lie in the fact that the atomised adhesive contacts with the substrate as a thin film, whereby the impact zone can be determined by the shape of the nozzle and the angle of the atomised adhesive jet  (,) and the distance between nozzle and substrate.  Compared with the familiar “bead-shaped” release of the adhesive, large-area bonding with a correspondingly high strength of the adhesive bond is thus applicable. Due to the atomisation, relatively large areas of the substrate can be evenly covered with a small amount of adhesive (…)” 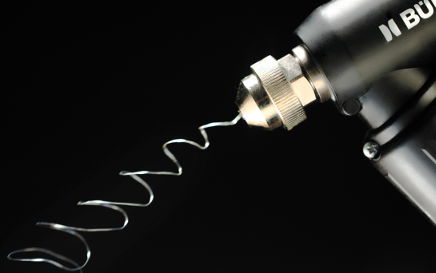 If workpieces have to be glued together over a large surface, the spray application is selected. Depending on the application, the adhesive is applied via a spray application head or a pneumatic, hand-held device. In this case, a thin strand of adhesive is laterally deflected by a preheated air vortex, entrained and circularly applied to the workpiece. By a relative movement between the applicator and the workpiece, a flat-surface application pattern can be generated. Here, it is not the entire surface that is wetted/coated with adhesive, but only lines generated, with thickened points at the intersections of the circles.

This type of application is mainly used for the bonding of foams, paper and cardboard.

Adhesives with short open times can also not be used. These may perhaps be applied without problem, but cool off so much during application that they lose their adhesion. Preheating the spray air can reduce this effect.